The MegaClaw was part of work done together as a blog Split Reaction. It is a 10’x10’x10’ ft claw game, controlled by a 4 ft tall Atari joystick that was used to pick up balloons and give out prizes. It was our entry for Makerfaire 2010 for which we won the Editor’s Choice Award. This is a project that took 3 summer months of weekends working in a basement shop. All of it was built by hand out of wood, using lathes, band saws, drill presses, wire foam cutters, about a hundred skate bearings and a few 3D printed parts. The electronics were powered by Arduino and programmed all in house. We were featured in Makezine for our work.

The full journey of our experience building it can be found at: http://www.megaclaw.com

The Makezine article can be found here: http://goo.gl/fQm5vr 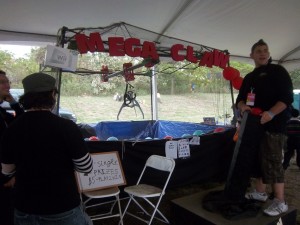 The PCB CNC was Split Reactions answer to getting circuit boards made on demand at home. It was set to have a price of $200. We never reached our goal of a $200 PCB CNC, but it required us learning how to work on a small budget and quickly.

Drawings of the PCB CNC in Sketchup , assembled and with exploded components. 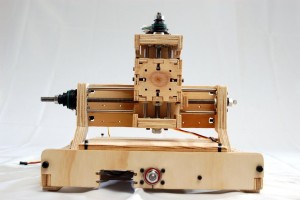 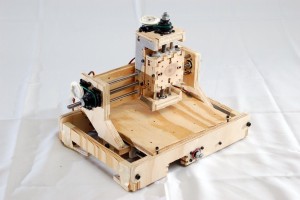 One of the many models we worked on of the PCB CNC.

The Antikythera Mechanism is a 2000 year old ancient computer thought to be made by the Greeks. It was a mechanical computation device that could determine the phase of the moon, the conversions between Green and Egyptian calendars, which olypic games should be played on each year and several other unknown things. There are many unknowns about what it could actually do, but I wanted to build a model of what was definitely known to be its capabilities. The purpose of making it was to eventually sell working models on Shapeways , however powder based 3d printing doesn’t have the resolution or strength to make a usable model. I was able to build a single working model out of laser cut acrylic. 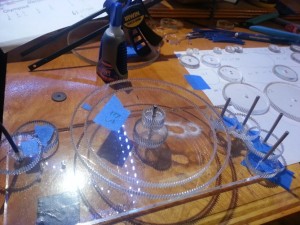 Antikythera Mechanism made from laser cut acrylic, and 3D printed.

Makeraser and Makelastic were my invention that became a successful Kickstarter. Makeraser is a multitool for 3D printing. It has a flexible 1095 blue stainless steel blade at .015” thick, so it’s perfect for removing prints from the print bed. It contains a pen in the cap, fill the pen with pure acetone, and use it to smooth and glue your ABS 3D prints together. Add some ABS lengths, measured out from the measurement holes in the cap, to make the perfect ABS Juice to keep your prints stuck to your print bed. Makelastic is a rubberizing solution for your PLA 3D prints. Add functionality to your hollow prints and making this squishy and bend. Add flexible hinges into your single prints. This was a many months long project, but we were funded and it was incredible. The caps were all 3D printed, while the steel blades were all laser cut. We had customers globally for the Makeraser, and still are getting new orders for them. More information about Makeraser can be found here: https://goo.gl/u86Sdp 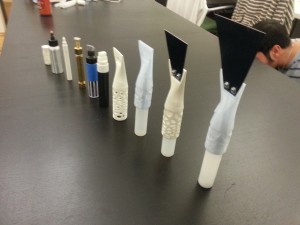 The progression of Makeraser Prototypes. 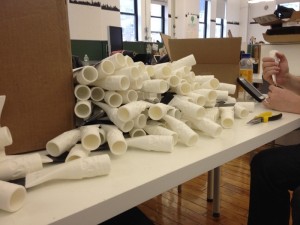 NYCEDC set out a challenge to find a new way to rehabilitate the waterways around NYC. The water quality is getting better and ironically it’s allowing the river life to eat away at the wooden piles supporting the piers of NYC at an alarming rate. Old steel piles are also rotting away, and both need to be replaced or patched continuously to keep up. Working on this project required understanding the limitations of working in a marine environment. You have to keep the thickness of your repair material down, since each bit of extra material underwater will make the water run faster, and raise the water level slightly, otherwise you pay a fine. 3D printing was a perfect opportunity to provide the most strength using the least material. I designed all the 3D models, for the proposal. After the proposal we built a small concrete printer to test new materials, for their printing qualities, strength, corrosion and environmental impact. More information about our involvement can be found here: http://goo.gl/cqrh05 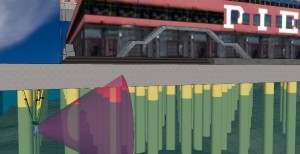 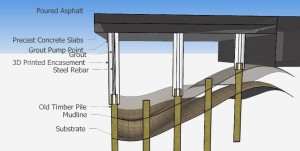 Sample diagrams used for the competition. 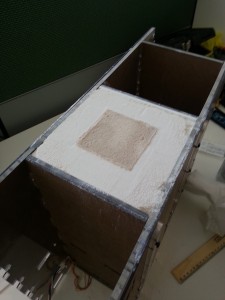 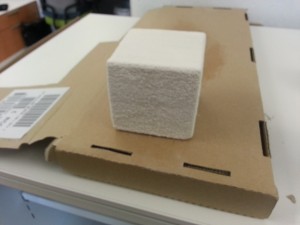 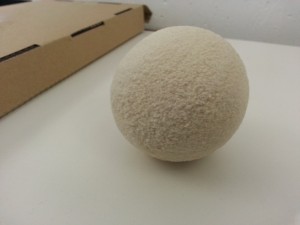 FreeATM is a company that allows you to get your money out of an ATM without paying a fee to do so, instead you watch a brief advertisement. I was hired by them to make an enclosure for the computer and electronics that sit atop an ATM to allow them to serve advertisements.  I designed ATM toppers for 3 different styles of ATMs. I also produced at home about 100 ATM toppers for them using laser cut acrylic. More information about their business can be found at www.freeATM.com. 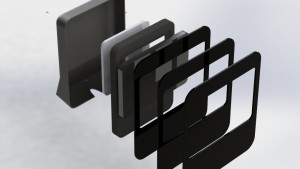 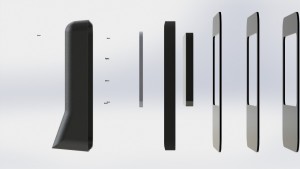 Renders of an exploded view of an ATM topper.

Completed ATM topper and one in the wild, in a shop on Broadway.

Part of the work with D-shape involved designing next generation printers that may be more useful for consumer use. This printer was designed to print out concrete within a 1mx1mx1m volume. It was designed using all off the shelf parts and minimal welding. It was following the design of the earlier smaller version used for material testing. The unique part of this printer was the use of food grade dispensing nozzles to dispense the binding material for the powder concrete. The use of food grade dispensing nozzles would have allowed it to print at incredibly high speeds, a large sink printed on this machine should have taken an hour.  Video of material spreading prototype here: https://youtu.be/SUNJaxiLZp4 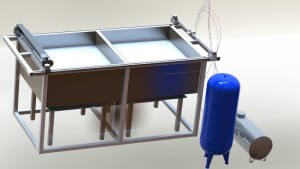 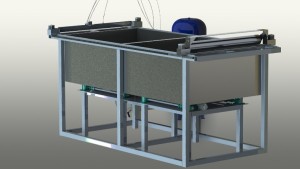 The printer made in full size would stand a little over 2 meters tall. 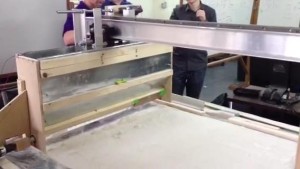 Image of the powder dispenser prototype in action.

Solar concentration power generation systems rely heavily on arrays of targeted mirrors. The cost of solar concentration systems is very often limited by the cost of the systems which target each individual mirror onto the power generation cell. In an effort to lower the cost of each individual pan and tilt mount for each mirror the 3D printed Heliostat was developed for SunFish Solar. The unique feature of the heliostat is that the elevation data is encoded into a 3D printed surface that is unique to the reflectors location on earth, and relative location on the grid of reflectors. The system was designed to operate for full azimuth and elevation control off of a single drive motor. The system even took into account for seasonal drift of the suns position. A functional prototype was built and is now a patent pending design. 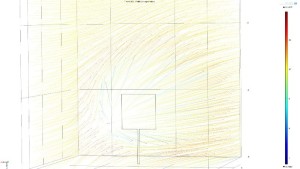 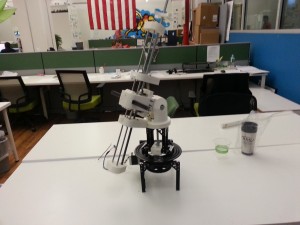 Typical game controllers are limited to vibration or taptic feedback. To get a full motion simulation feedback requires large hardware or mechanized chairs to move the entire player. The Gyroscopic Haptic Feedback controller (patent pending) allows for full 3-axis motion simulation in a game controller that will fit in your hand. It works by using an array of spherical induction motors which act as 2-axis control moment gyroscopes. Early prototypes were developed to see if the feedback was a compelling gameplay element, this involved building a game in Unity specifically to take advantage of this ability. This involved making controller from available materials. There is an unconstrained one dimensional version, as well as a constrained single axis version. 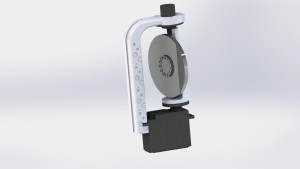 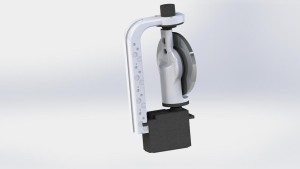 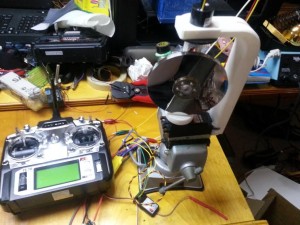 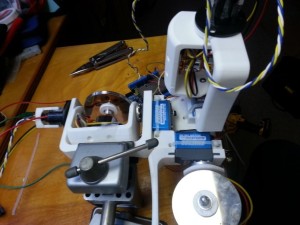 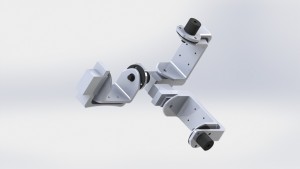 TrenchPhysics is my blog (you are here) where I posted random projects that I found were fun. Most notably I created a few projects which gained me some minor fame.

Also random robots that I build for fun. 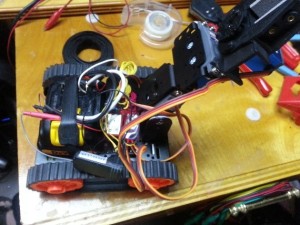 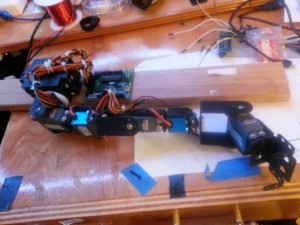